Exhibition "For the Freedom of Ukraine!" with the support of BC "GEOS"

BC GEOS is pleased to become partners of the large exhibition "For the Freedom of Ukraine!", Organized by the Bohdan Hubsky Foundation "Ukraine - XXI Century" and the National Museum of History of Ukraine in World War II, which opened on the 30th anniversary of Ukraine's Independence in Kyiv.

The exhibition is the first interstate event of Ukraine and the United States in the museum sphere, it is a significant example of cultural diplomacy in the history of Ukrainian-American bilateral relations. 15 Ukrainian museums and archives also took part in the exhibition project.

"For the freedom of Ukraine!" designed to acquaint Ukrainians with the army of the First World War and the Liberation War of 1917−1921, in particular the Sich Rifles, the UPR, the Western Ukraine, the rule of Hetman Pavel Skoropadsky, the Directory of the UPR.

In two weeks the exhibition was visited by almost 10 thousand people! So we invite you to a tour of history and aesthetics, which is valid until 31.05.22. 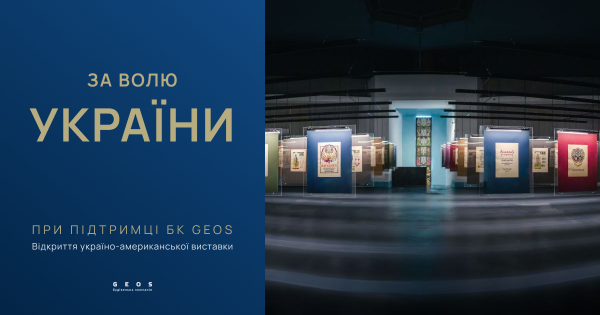